We manufacture a world famous pocket pistol. You've seen it before. Below is a picture of a hot blued "Standard" unit that we built for Fabrique Nationale in our Charlottesville, Virginia facility sometime during the 1980's. More than half a million of these semi-automatic pocket pistols were manufactured in Europe. We've made tens of thousands more in our facilities in North America. You know this beauty as the "Baby Browning Pistol". 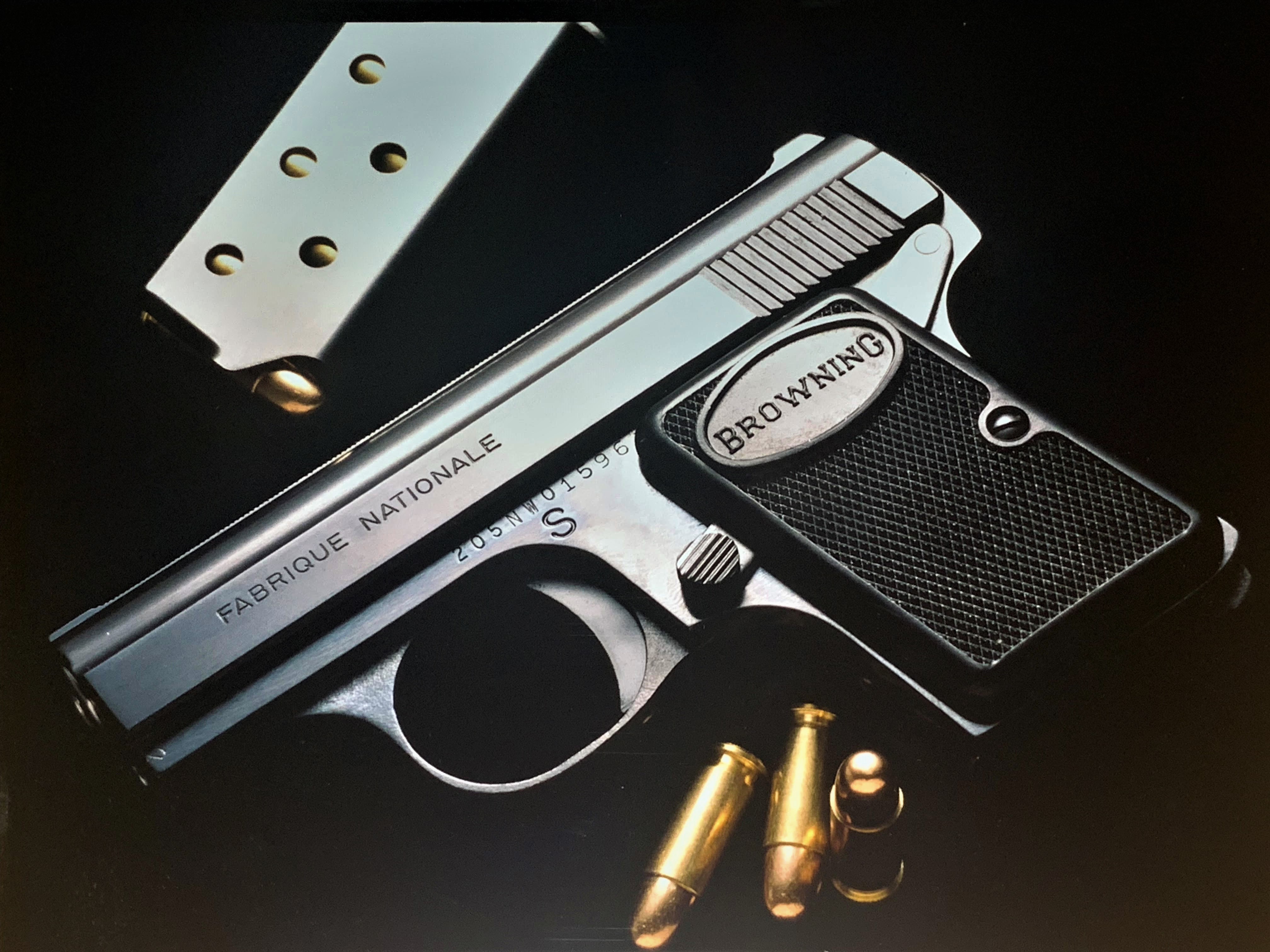 The DNA of this celebrated pocket pistol made its first public appearance in the John Moses Browning designed semi-automatic pistols of the early 1900's. Fast forward to the late 1920's. A man by the name of Dieudonné Saive decided he could do better. Saive was in charge of Fabrique Nationale's factory operations. He tinkered with Browning's small pistol designs and came up with the most celebrated limited blowback, semi-automatic pocket pistol the world has ever seen: the 1931 Fabrique Nationale 6.35mm, 6+1 shot Baby. And he got the pistol right the first time. No need to mess with it since.

1931 was a time when some things of consequence were better made then ever before - and greatly valued by folks throughout the world because of this simple fact. The 1931 Fabrique Nationale "Baby" pocket pistol was one of those "better made things of consequence". Back then FN's factory was located in Leige, Belgium. The Baby was manufactured in a very large building utilizing hand drawn blue prints and leather belt-driven mills and lathes to carve metal. Skilled labor from the nearby town of Herstal was used in the manufacture and assembly of each pistol. Decades later, the Baby was manufactured by one of FN's subsidiaires located in Bayonne, France: Manufacture D'armes de Bayonne. Precision is the only company engaged by FN outside of Europe to ever manufacture the 1931 FN 6.35mm, 6+1 shot pocket pistol.

1984 was the year FN contracted with our Canadian parent company to utilize state-of-the-art engineering and computer numeric controlled machine tools to manufacture the metal parts for the Baby. An order was issued to us by FN for 40,000 of the "Standard" hot blued pistols. It was our job to machine all of the metal parts and assemble, test and package each one of them for export. The primary objective was to produce the Baby at a level of quality that exceeded the original Belgium made version. We were uniquely qualified to do so because we were considered the "best-of-the-best" of fully integrated Swiss screw machine shops in North America. And the fact that we had served as a major sub-contractor to FN for many years on several of its tier-one weapons systems, including various sub-machine guns, made us the natural choice for the "Baby Project".

Canadian firearms laws being what they were during the 1980's, the first "Baby" ended up shipping from our Charlottesville, Virginia facility during 1987. Back then all of these exquisite pocket pistols were exported to Belgium for re-shipment by FN to various re-sellers throughout the world.  Because of the US Gun Control Act of 1968, none of them made their way back into the USA. And this upset folks. By the late 1980's we were both manufacturing and distributing the Pistol in limited quantities to distributors and dealers throughout the USA. And in keeping with the times, we marked the Pistol as the "PSP-25". 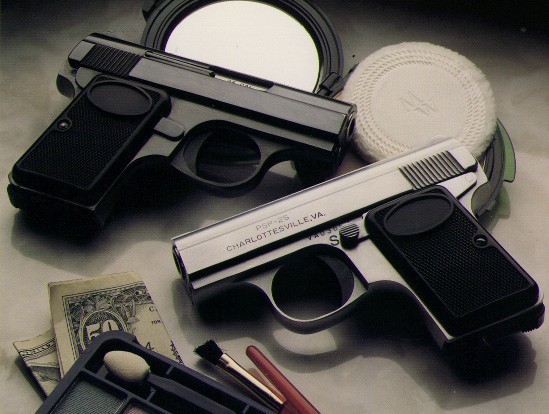 In 1995 we separated small arms manufacturing from the rest of our aerospace and defense related business and set small arms manufacturing up on its own. And then we re-christened the Pistol. It was known thereafter as the "PSA-25". Since those days in Virginia, we have manufactured this Art Deco classic in federally licensed workshops under our ownership, control and direction in California, Colorado, Illinois and Nevada.

Some folks who know a thing or two about limited blow-back, semi-automatic pistols claim that the 6.35mm, 6+1 shot pocket pistol we manufacture is the pre-eminent example of an elegantly designed, well machined, finely finished, exceptionally accurate firearm. And we agree with them. In fact we even maintain a federal configuration patent on its classic good looks.

Like all things well made, the process is the product. In keeping with the original mandate from Fabrique Nationale, we continue to this day to manufacture this Art Deco classic utilizing the very latest technology available. This technology includes the use of computer generated, 3 dimensional, interactive, detailed engineering drawings. These drawings give rise to thousands of lines of machine code which is passed along to multi-axis, numeric controlled machine tools. We super-charge these machine tools with laser-guided, dimensional inspection probes that assure the accuracy of machined metal parts, regardless of cutting tool wear. Implementing this technology has been no simple thing to accomplish. 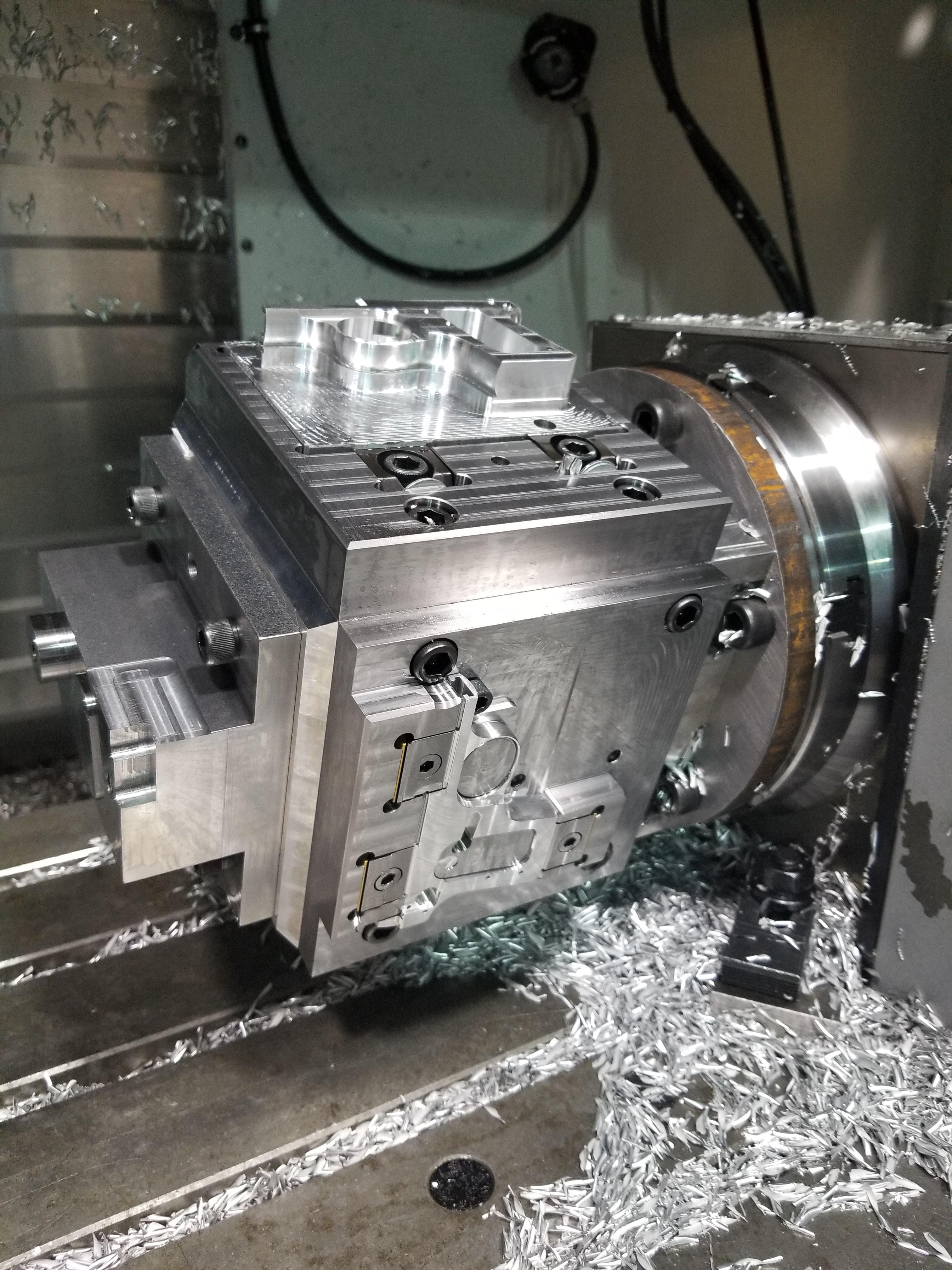 An extraordinary amount of time, engineering skill and money have gone into making things "right". All of this activity and effort is at the heart of what we do to carve metal parts for the PSA-25 pistol. Put simply: it comes down to having the requisite pre-conditions in place in order to acheive the desired results. 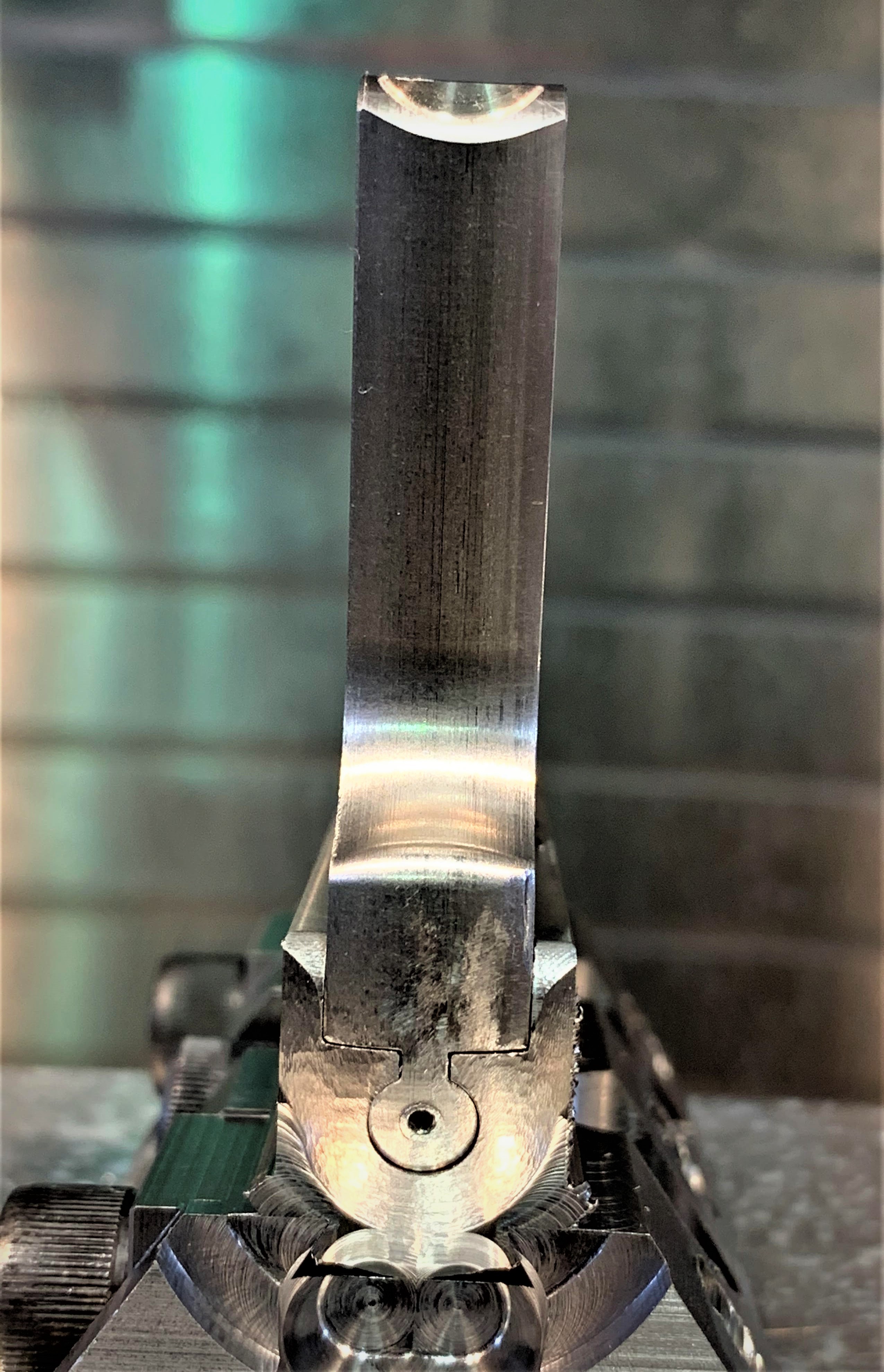 After machining - and the specialized hand work of deburring, sanding and polishing - each of these beautifully crafted pocket pistols is assembled by a single craftsman from 26 different parts. And then each one is function tested to make sure that it does what it is supposed to do. The continuous quality control effort that infuses all we do when crafting a PSA-25 pistol is about building a near flawless, all steel firearm. Each must stand the test of time and regular use.

The pocket pistol that we manufacture will appeal to your sense of historical significance, quality and usefulness. The DNA of the Baby is drawn from the early 1900's small pistol designs of America's most celebrated firearms designer. But it also reflects the genius of the man who ran Europe's largest small arms manufacturer from the 1920's into the 1930's - and his sense of Art Deco style - as manifested in cold, hard steel.

We think that this celebrated semi-automatic pocket pistol is a rare thing in the world today: a functional work of art in production for almost 100 years. You should take comfort from this single fact alone. The 1931 6.35mm 6+1 shot FN Baby Pocket Pistol was designed right the first time. And it continues in production to this day as the American made PSA-25. 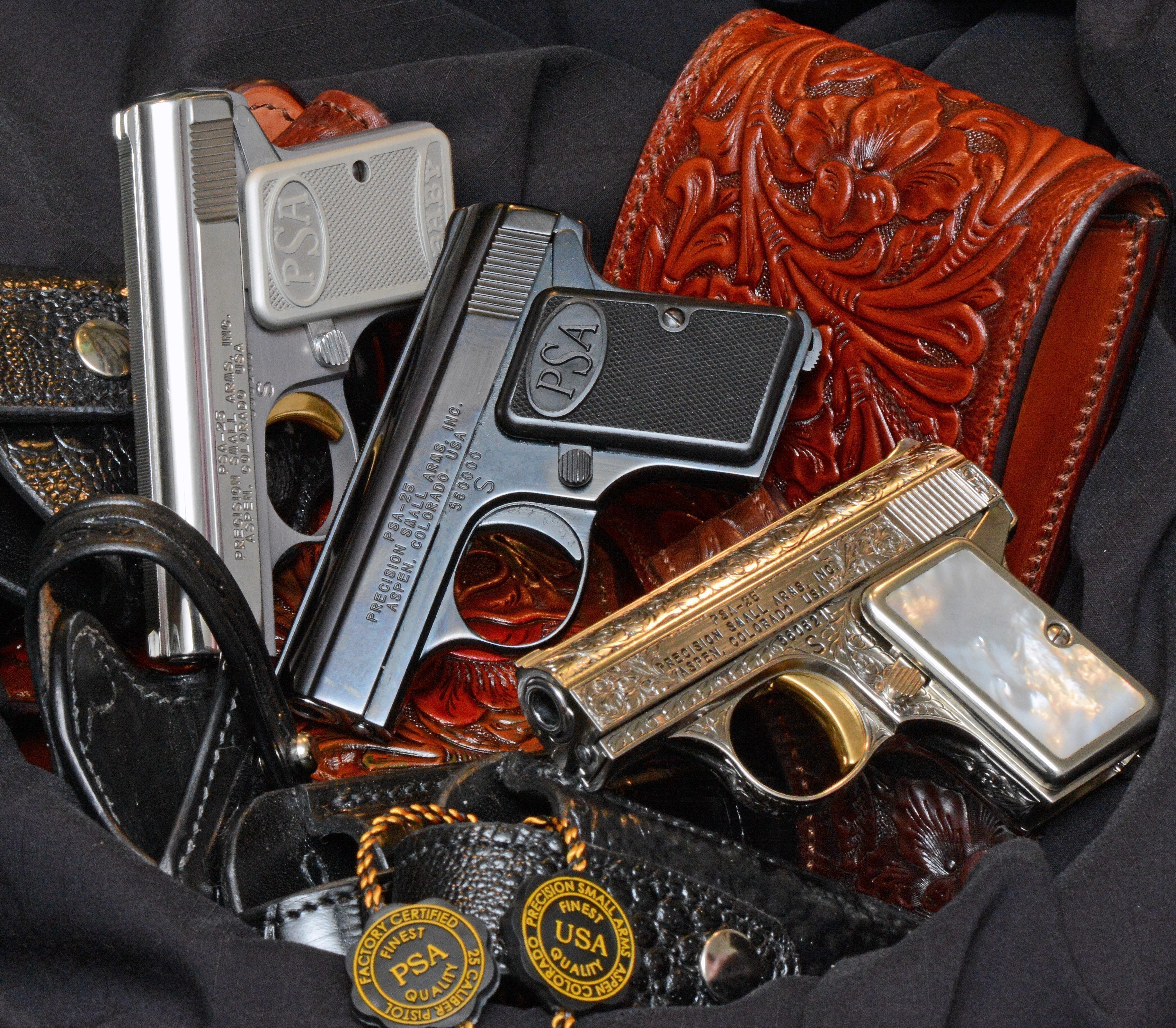 Can't subscribe you right now. Try later
Thank you for subscribing to the newsletter! We hope you enjoy shopping at PRECISION SMALL ARMS, INC.